Close
The 5 nuggets of climbing in Diois
Mountaineering | Climbing

For several years, our ambassadors Antoine and Marie-Do have been crisscrossing the south of France in search of the most beautiful climbing spots. Today, they take us to discover the Diois region, between the Vercors and Provence. A wild region offering a great diversity of landscapes and activities. Discover the five essential climbing spots in Diois!

It all starts with the pronunciation. You need to drop the "a" and pronounce it "Sou". A bad elocution will make the local innkeepers blacken their features. This massif of the west of Drôme is famous for its geological peculiarity: a perched synclinal plan, bordered by beautiful cliffs like a big bathtub. In its center is the small village of Saou, its square and its few restaurants.

On the climbing side, there are several sectors, from the cliff to the big route. On the Poupoune sector you will find beautiful pitches with knobs, pieces of flint embedded in the limestone. The flagship sector is that of the Tour. Just a few steps from the parking lot, the place is ideal for initiation. And above these first pitches, a multitude of great routes are offered to you. One of the classics is "Nomades Land". The start will surely leave you some memories if your level is right. The 6b is tough. The rest of the route is more homogeneous but the climbing is still dry and the rock is sometimes doubtful.

If you are looking for cracks to throw your belayers, go to the "Arête Sud". Although very heterogeneous in terms of equipment (cable, anchors, ...) this route allows you to climb three very nice pitches (L4, L5 and L6) of adventure terrain.

If I had to choose a favorite, it would be the third (6a) and fourth (6c) pitches of "Vent de sable". In this steep and overhanging wall, the line follows a very nice straight crack.

Before leaving, go and have a drink at the Gasoline Palace bar. 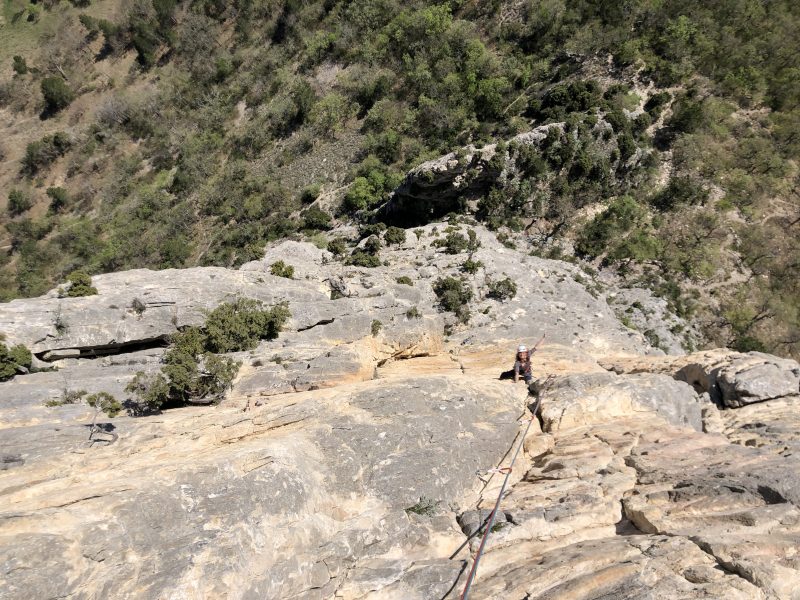 At the eastern end of the syncline are the Trois Becs, the highest point of the area at 1589m. They are also three high walls, oriented between East and North, which offer unique climbing. Beware of climbers who are fond of sanitized cliffs! Here the climbing is demanding. First of all the rock will leave you with emotions. The happiness of the flinty walls will turn into doubt in the crumbling parts. In the equipped routes like "Parfum d'Opale", you will have to climb far above the point before finding the next one. And concerning the routes in adventure terrain, they have a character close tomountaineering.

This is what we discovered in the "Voie des Parisiens", opened in the 60s on the summit of Roche Courbe. The line scratches the face in its center. The line is futuristic. It does not follow any obvious line of weakness. It forces the wall by steep and compact passages, atypical for the time. 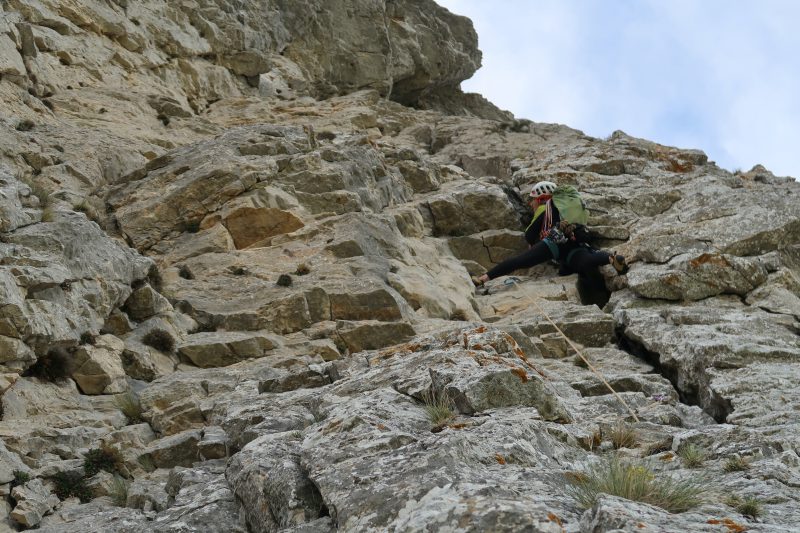 The first pitches set the tone, vigilance and concentration are required. The atmosphere grows as the climb goes on. We can easily imagine some basejumpers jumping behind us. The 6a passages are physical and look like modern climbing. A minimum of commitment is necessary, even in the easiest pitches. We enjoy the steps on flint. When the sun crosses the summit ridge, the atmosphere becomes cold and austere. A real north face of the Alps.

We reach the warm side and the mountain pastures with the satisfaction of having climbed beautiful sustained pitches and a historical route. 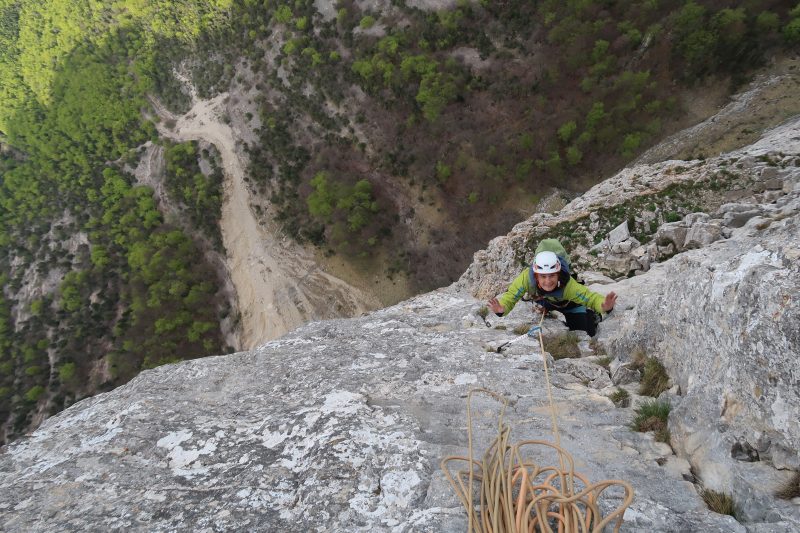 As we arrive at the small hamlet of Ansage, we are struck by the calm and peacefulness of the valley. Two sounds of bells rise up, those of the local goats and those of the climbers' hardware already busy at the foot of the wall. Omblèze is mostly known for its rinds. The compact rock reveals fine strata. It is a rather technical climb. Despite its modest size, there are several "small" big routes.

We went to see one of the most affordable "Jojo le bricoleur". Five very nice pitches for 130m high. The holds are grey and sculpted in the starting slabs. Then the profile becomes much steeper, the atmosphere becomes airy. The ground is close but the overhang is marked. Fortunately the 6a's have big holds. The ropes that hang down no longer touch the cliff. The penultimate pitch is superb, a succession of steps and handholds. The abseils in spider wire are just as fun. For the hyperactive ones, it is always possible to climb some more pitches on the way back. We leave then Omblèze by the terrace of the Mill of the Pipe and a small bath. 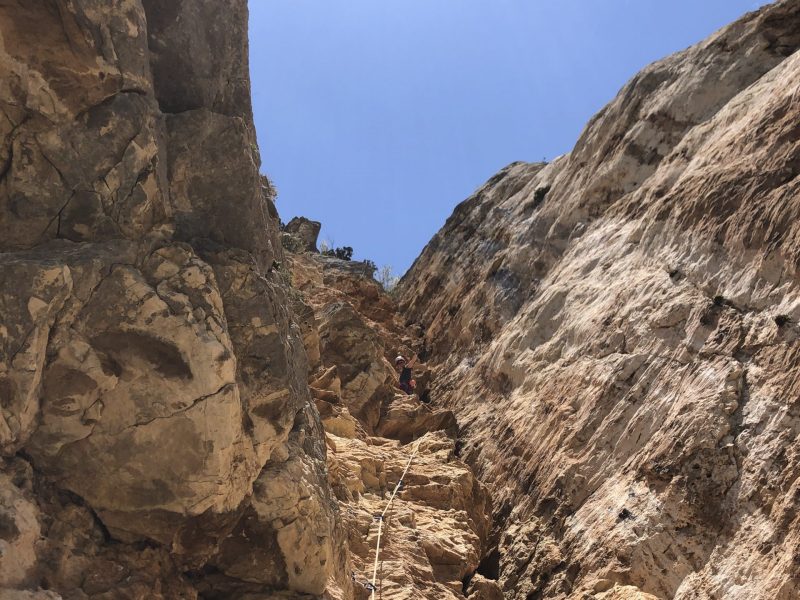 Is it still necessary to present Archiane? We could write pages about it. With Presles, on the other side of the Vercors, they are the most emblematic cliffs of the plateau. We could not miss this stopover. To reach the Cirque d'Archiane, you have to take the dead-end road leaving the village of Menée. We go up the valley with a breathtaking view on the rock. What way to choose ? Modern ? Trad ? There is one for all tastes. 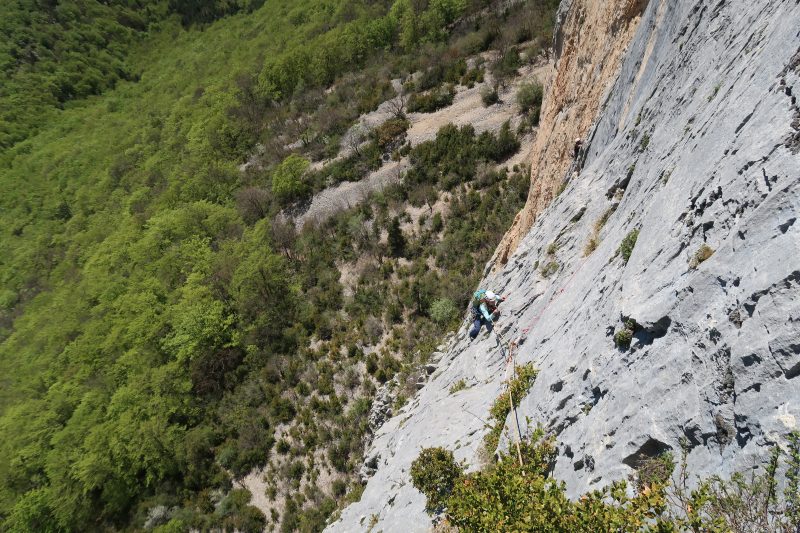 We decide to play the historical route: "la voie du Levant". Partially equipped with pitons and studs, it runs on the East wall. By the ecological path, the approach is fast and bucolic. As soon as the sun comes out, the vultures start their aerial dance. The rock is very good on the whole route and the grooves on L3 and L4 are superb. A good set of belayers is necessary to protect yourself properly. The hard passages (6a/b) are generally very well equipped. While crossing the balsams and the ledges you will surely come across with astonishment some ibexes, tightrope walkers on the walls. The passages are clever despite the compact and steep areas of the cliff. The bulges in some of the chimneys remind us that the route dates back to the sixties, and that it hasn't aged a bit. We climb meter after meter these 400m of climbing, just as the tiredness grabs our energy. By easy steps, we reach the summit plateau. What an incredible landscape! With a side Canadian Rockies, we walk in a mosaic of steppes, forests and lapiaz. We return on foot by the big tour, to take advantage fully of this natural spectacle. 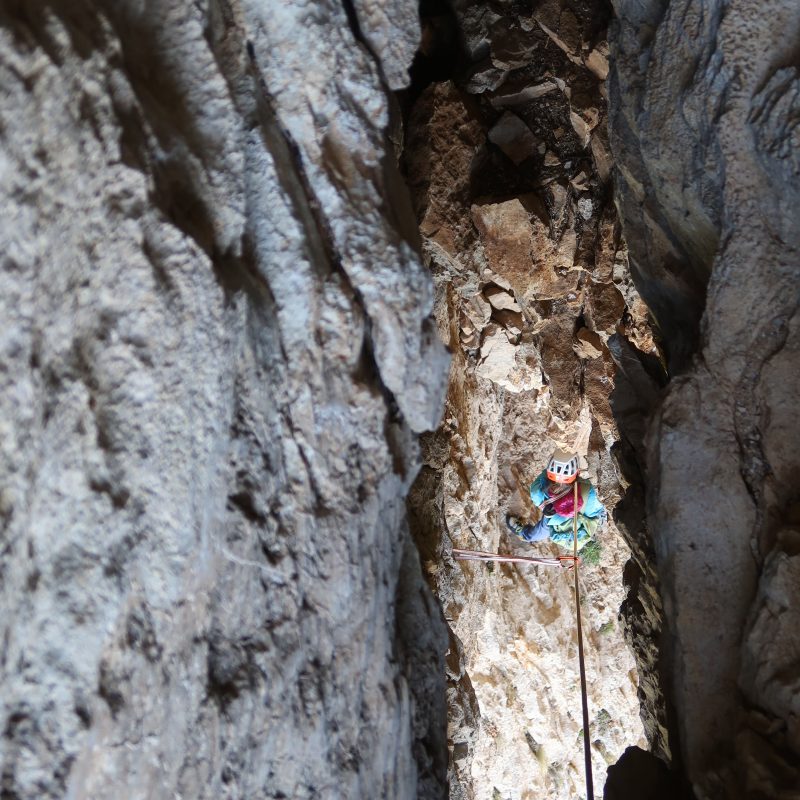 Climbing in 3 dimensions at the Levant route - © Truchot-Vannier/Rolle

When you travel in the Diois, a visit to Le Claps is a must. The invigorating stream which passes in the small gorges is heavenly. And when you raise your head, an immense chaos of blocks overhangs you. One can imagine the gigantic landslide that must have occurred in the distant past. A godsend for the climber. Most of these blocks are equipped for cliffs. The main game lies in locating the right boulder that we are looking for in the middle of hundreds of others. 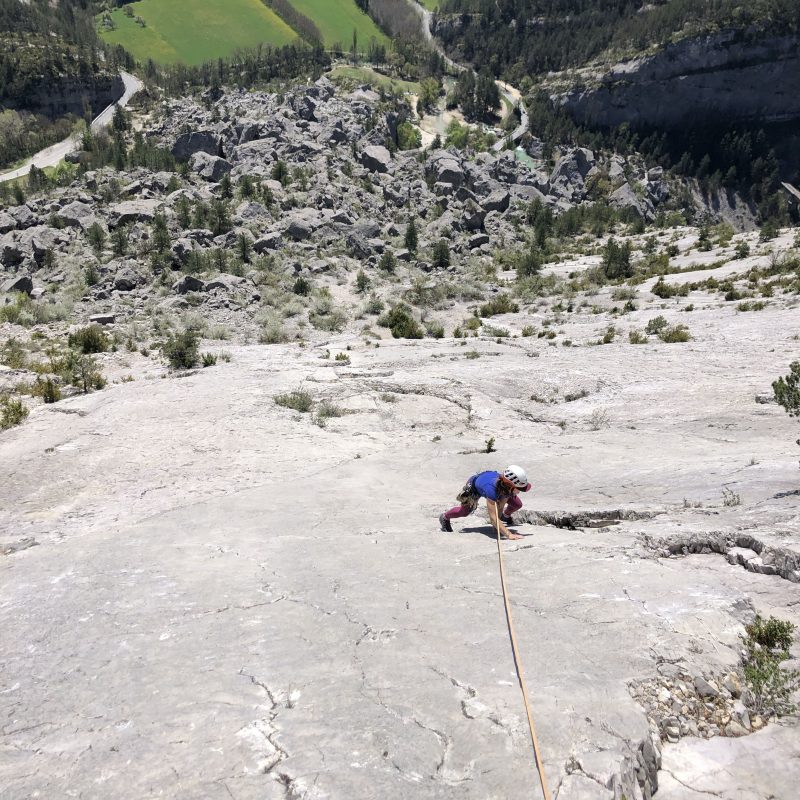 The rock has been removed and large slabs have been added a few hundred meters higher. These are equipped as big routes and are perfect for the initiation of the discipline. Not very inclined, we walk most of the time... on all fours. Some passages are straightened, you start a slow crawl. Yes, don't expect to find any holds, the slab is smooth! You have to use the largest possible surface of your hands and feet, push hard and hope not to fall back down the grappled centimeters. The climbing is still fun and entertaining. If you are a paraglider, note that on the other side of the river is the take-off of Clamontard. The flight is superb, dominating Luc-en-Diois. 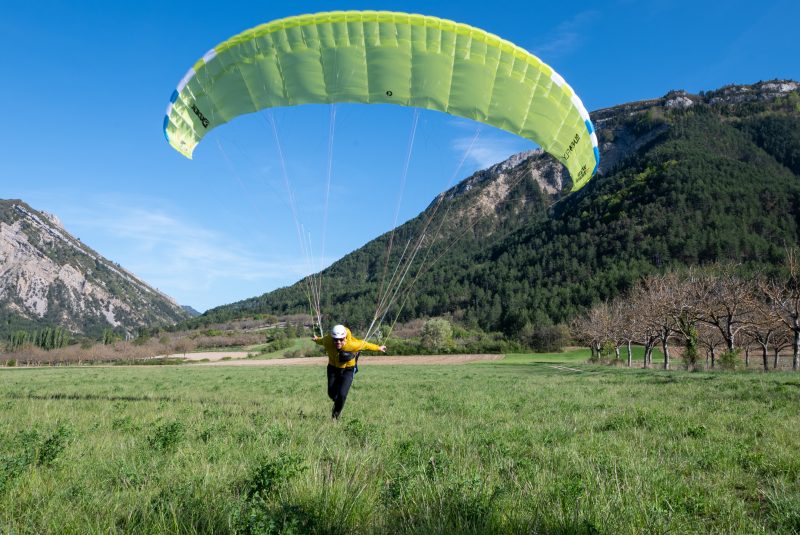 How to manage a rainy day for the hardcore climbers? The solution is simple, go for a ride in the Gorges du Gats. Just before arriving in the picturesque village of Glandage, a beautiful and large overhanging wall borders the road. You'll be in action in about two minutes. The route is called "Pipeline". You will have to like horizontal climbing. It crosses the whole cliff from left to right. The pitches are well equipped, the climbing is fun and the rock is incredibly sculpted: three ingredients for a good day. In addition, you will be the star of the tourists passing by in the car. 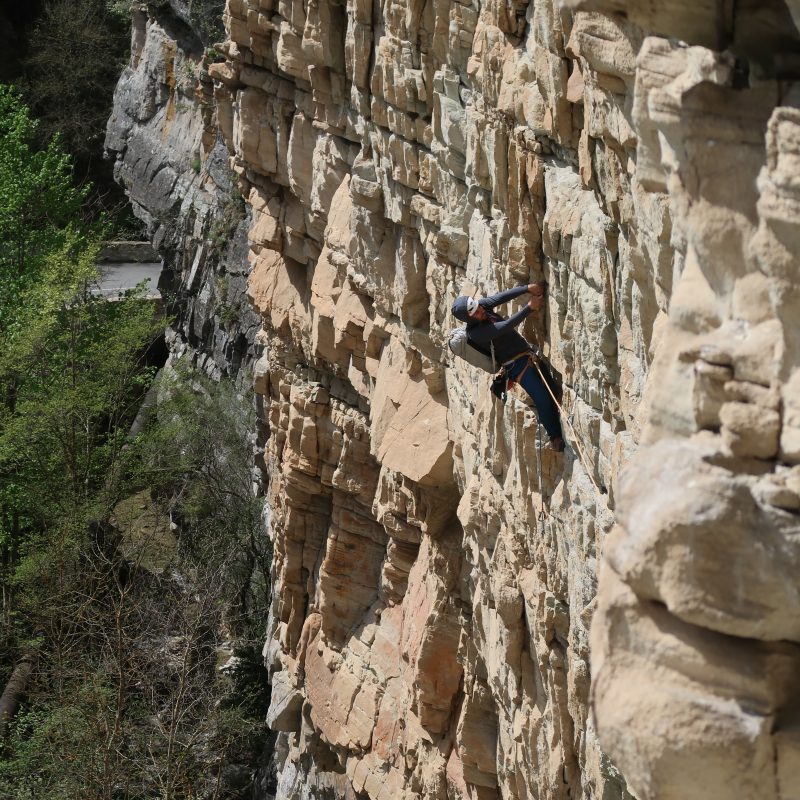 We hope that this selection of pieces chosen by Antoine and Marie-Do will have given you the desire to discover the region! If you go through the forest of Archiane, you might be lucky enough to come across the old druid in his hundred-year-old tree... 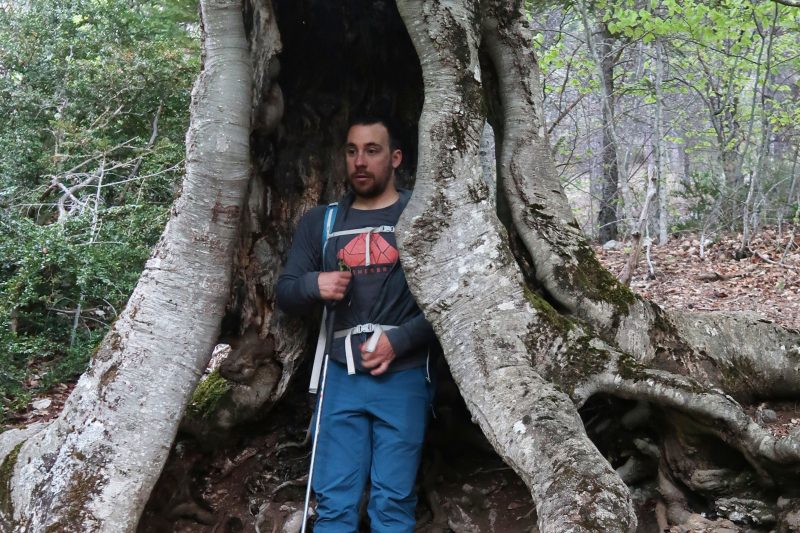